After a couple of beautiful days, one last storm arrived over the weekend to see us off! This time it was Storm Felix which has caused floods in Cordoba, a supermarket collapsed in Jaen, another metre of snow on the Sierra Nevada, but only inflicted a couple of days and nights of strong gales here on the Cabo.
Now on our last day here, Felix has gone on his way and the weather is glorious again.  I wish we could relax and enjoy it but we are busy cleaning and packing.

But here is a photo taken in the sunshine. 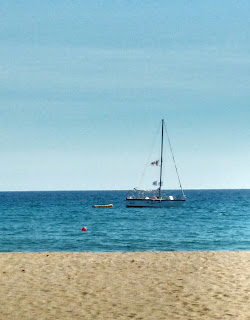 We have said goodbye to various friends, including Clements, a sweet, young homeless German man who lives in an abandoned shepherd's hut in the hills outside San Jose, along with Dave who plays the guitar, and Richard who heroically organises the walking group S joined during our stay.

Tomorrow we head north, back to la Cabrera, then on to Bilbao.  Finally we will arrive (I hope!) back in the UK on Friday.
Posted by Miriam at 06:52 No comments:

When a boy goes missing . . . A Song for Gabriel

The weather is improving now but a dark cloud still hangs over the area: this is a post I was hoping not to have to write, or to be able to give it a happy ending, but that seems more and more unlikely as it is eleven days now since 8-year-old Gabriel Cruz Ramirez went missing in the hamlet of Hortichuelas.

It feels rather too close to home because that same morning, on 27th February, my partner S. was out with a walking group.  They walked through Hortichuelas, cheerfully singing comic songs, and so it was a horrible shock to learn the next day that, barely an hour after they passed through the tiny village, Gabriel had left his grandmother's house to go to a friend's to play and hadn't been seen since.

There has been a massive search of the surrounding area - a mammoth task in a terrain so rough, full of deep abandoned wells, some of them dating back to the time of the Moors, and hills honeycombed with mine workings, many of them two or three centuries old.

Entrance to one of the old mines up in the hills: 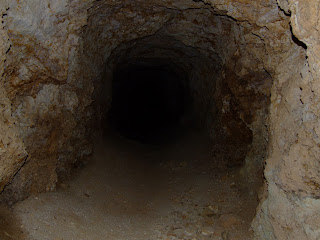 The torrential rain we had in the days following Gabriel's disappearance hasn't helped either.
The local shepherds are helping the police as they know better than anyone else where to find the old wells.

More than 8,000 people gathered in the city of Almeria yesterday to show support and sympathy for Gabriel's family, but as day after day passes hope is fading.

I wish it were possible to rewind time like a film to the moment before he left his grandmother's house.

We dread going home in a few days, possibly never to know what has happened to the little boy.


A Song for Gabriel.

Walking along the coast,
we see a police boat
speeding passed,
and on the dirt roads their landrovers
patrol, searching for you.
Where are you, Gabriel?

Day by day goes by,
drones fly through the steep ravines
inaccessible to man,
helicopters patrol the skies
hovering above our heads,
looking for you.

One hundred volunteers, heads bowed
go scouring the ground, but even Elton,
most famous
sniffer dog in Spain,
brought from the north just for you,
has failed to track you down.

Day by day goes by, your story
is on the news
but there's no news of you.
They dredge the wells and search
the honeycomb of mines
within these hills.

You could be anywhere
in a hole so deep, so old.
Lost, alone in the dark.
Where are you, Gabriel?
Where are you?


Since I wrote the above post, Gabriel's body has been found. A young life snuffed out so tragically.
Posted by Miriam at 04:22 No comments:

Storms in a Desert!

As well as the ruins of the goldmine at Rodalquilar, there are the remains of other striking industrial buildings and structures on the Cabo de Gata.  Human beings have made their mark on the area for centuries.

Many of these buildings are connected to the need for water - the old aljibes or water cisterns first designed and built by the Moors can be found everywhere. The ones in these photos are at Cortijo del Frailes, the grand farmhouse (now ruined) where a dramatic murder took place in 1928 which provided the inspiration for Carmen de Burgos's novel, Carnation Dagger, and  Lorca’s play, Blood Wedding. 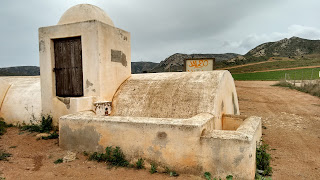 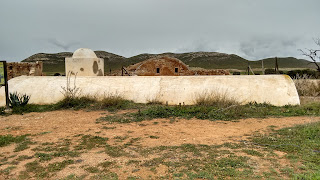 One day we drove up passed the small town of Nijar towards Lucainena de las Torres, to the haunting site of the deserted dam and the Isabel II reservoir, built in 1848.  It was an ambitious project in its time, designed to bring water and fertility to the fields of  Nijar, but it was a complete failure - in only twenty years the dam had silted up and after fifty years there was no sign of any water at all.  It has been abandoned ever since. 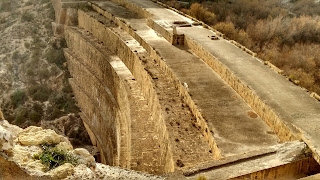 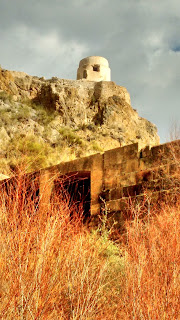 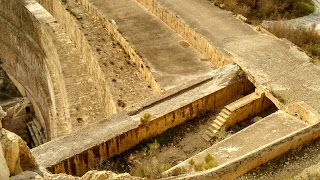 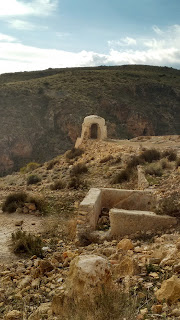 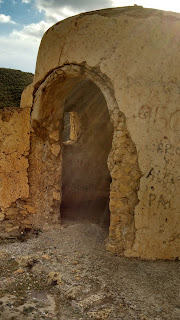 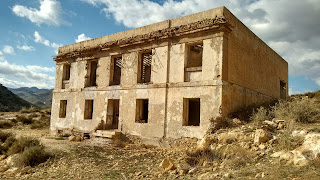 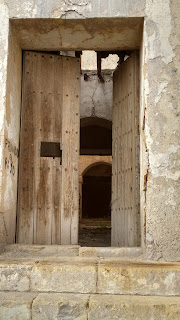 It is a strange eerie place, totally silent.  In San José, we’re used to hearing the incessant sound of birds singing but here there was not a single bird to be heard.  There were no houses, no people, nothing stirred - not even the wind. 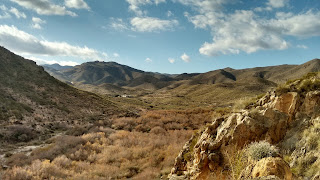 Another day we stopped to look at the impressive, if crumbling, aqueduct at Fernán Pérez, also designed to improve irrigation in the region.  It was built at the beginning of the 20th century to redirect a stream in order to extend farming. 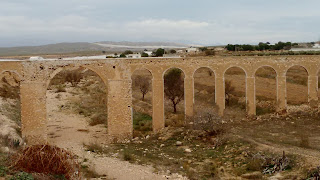 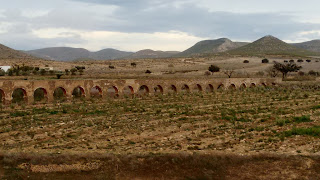 In an area that is officially designated as desert (hard to believe as I watch the rain through my window) the need for water is a constant preoccupation and concern.  Commercial agriculture in the huge plastic-covered greenhouses of Murcia and Almeria is increasing this preoccupation, consuming more and more water and so lowering the watertable of the region to an alarming extent.

As I said, it’s hard to believe I’m in a desert, having spent three months here during one of the worst winters Spain - and indeed, the whole of Europe - has known in modern times.  The province of Almeria has been tormented by constant storms, beginning with Storm Ana soon after we arrived and continuing through the alphabet to Storm Emma which has been raging for nearly a week now!
It has been a miserable and depressing winter but at least we've had no snow here, unlike the UK and most of Spain!  However, we will be glad to return home next week.

The Cabo to Gata seems to attract a lot of highly talented graffiti artists and there are many striking images to be found in the strangest places. This is especially true of Rodalquilar with its large number of ruined miner’s cottages and the strange deserted buildings of the old goldmine. 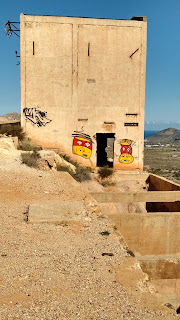 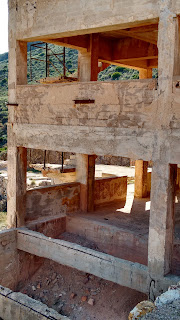 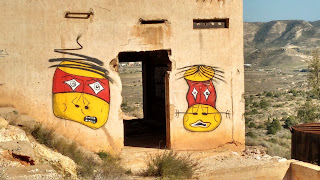 I’m often puzzled as to how the artists managed to decorate some of the harder to reach parts of the goldmine! 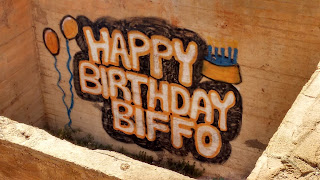 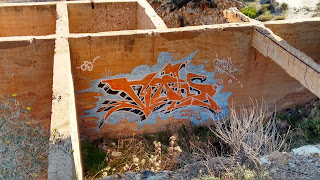 This area has inspired creativity for a long time. A great many films have been made around here, e.g. Lawrence of Arabia, Indiana Jones, as well as many westerns. Film buffs can follow the “rutas del cine” and see the places where various scenes were shot.
In Almeria city there is a statue to John Lennon who wrote his song “Strawberry Fields” while staying there when taking part in the making of the film, How I Won the War. 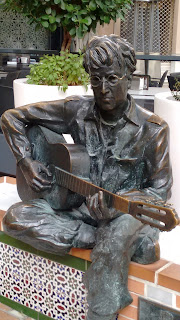 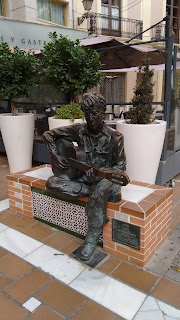 Sounds of the Cabo.

One of the most distinctive sounds of the Cabo de Gata is the ringing of goat bells.  It is a haunting sound that carries a long way across the quiet valleys and hills and it always fills me with a strange, achingly painful happiness.

There are three herds of goats and sheep in this area so we come across them almost every day grazing by the roadsides, in the fields or on the hillsides, on the cliffs and the dunes by the seashore.  Once it was terrifying when we were out on the cliffs and we saw two young billygoats headbutting each other on the edge of a sheer drop down on to the rocks below!

In this short video clip you can hear both goat bells and the blustery wind that is another common sound of the Cabo:

They are always accompanied by their shepherd and at least one dog - often two.  The shepherds live closely with their animals.  In Rodalquilar, there are two shabby old houses on smallholdings, both with a goat shed standing right beside them where the goats and sheep are penned at night.  The animals are kept for their milk which is turned into cheese – the land here is too poor for dairy cattle so all the cheese comes from goats or sheep. 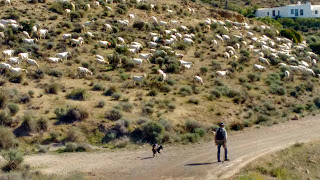 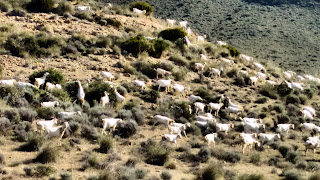 Other common sounds of the Cabo are the calling of the crested larks that we see everywhere in the countryside, the constant cooing of the collared doves flying about San José (I have seen as many as ten at a time roosting together on a rooftop), and the hypnotic sound of the sea.
Posted by Miriam at 08:45 No comments:

ART IN THE EVERYDAY


Besides the professional artists, creativity can be found everywhere in less formal ways, such as these painted gates in Rodalquilar: 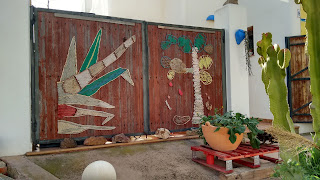 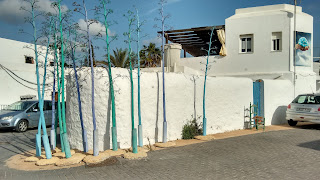 Ephemeral art is constructed on the beaches, at Playa el Playazo: 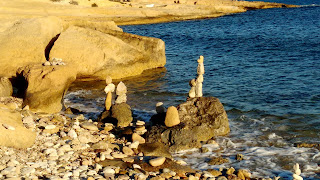 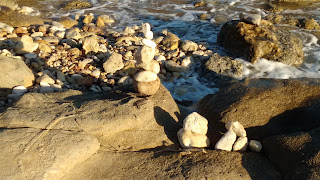 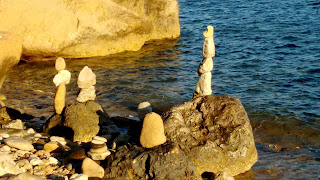 And at Cala del Carnaje: 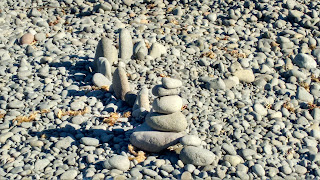 While there is the general run-of-the-mill graffiti about, there are some really striking images to be found, such as this face: 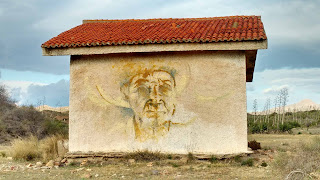 Miriam
I'm a writer living with chronic illness. I love travelling and I love the sun so this blog will follow my ideal adventure, exploring the Cabo de Gata. Last winter, I followed in the footsteps of the socialist writer, Juan Goytisolo, who made three visits in the 1950s, walking through the Cabo de Gata, the poorest and most deprived region of Spain under Franco's rule, and then wrote a book, Campo de Níjar (Níjar Country), published in 1960 which was banned in Spain by Franco. Needless to say, as I'm disabled, I didn't walk it (!) but I visited many of the places he walked through. The area is still quite poor although it has changed dramatically since 1960. This winter, December 2017 - March 2018, I shall do something totally different, taking as my theme, "Landscape, Seascape, Inscape, Escape."